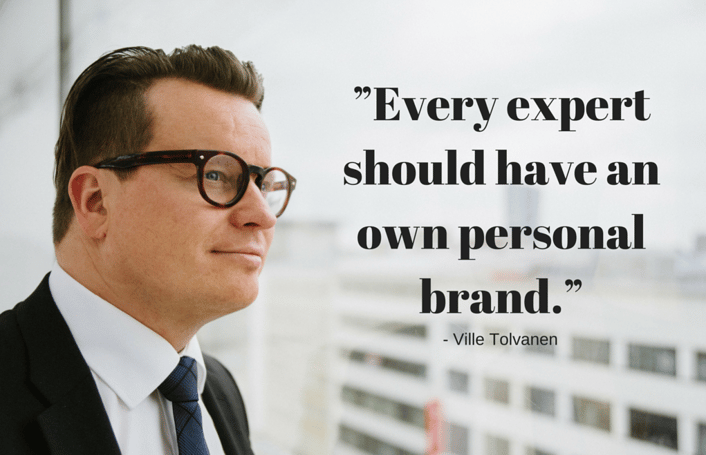 Ville Tolvanen, Forbes Top 3 Influential CMO, says that the term "personal brand" misleads us from the real meaning of it. It reminds us of manipulation and of something artificial. In history cows were sorted to better or worse meat by burning marks to their cowhide. That is actually where the word brand comes from. Personal branding means that a person is standing out from the flock of people. A person does not make himself a brand but the other people around him make it.

There are plenty of well-known people such as Oprah Winfrey, Elon Musk, Arnold Schwarzenegger and Mark Zuckerberg. They stand out by being relevant and consistent. Their surroundings have made them well-known personal brands.

Is it one’s own decision to stand out?

Yes, of course. We need to understand that branding has to be distinguishingable and consistent. Everyone who wants to stand out has to work really heard to make his way up. Some people write books and some draw pictures or sing songs. The way to stand out has to be a good fit for one's identity.

What’s in it for the company?

All the best selling movies sell because of well-known movie stars. In sports, well-known stars increase the interest of an audience a lot. I’ve heard that for example Teemu Selanne would have gotten the same salary no matter if he played or not because he was such an interesting person. These trends are spreading to the business world little by little. In my opinion, every company should encourage their people to stand out and brand themselves. According to research, individuals are even ten times more interesting than institutions.

”Jari Sarasvuo has over hundred times more Twitter followers than his company Trainers House has.”

This is because of there is no way to be able have a conversation with the institution. It would be weird to think that we could be interested in what for example Nordea thinks. Nordea doesn’t think. The people working for Nordea think.

In addition to this success always gets a face. How many people knew the CEO of Supercell before it's success? Companies that want success are building a face for it even before the success.

Why don't some leaders want their employees to stand out?

This is a very old-fashioned way to think. The thought that an organization is a factory and a work is production made by the conditions of an employer does not exist anymore. It is an old culture that strives to make everybody the same.

”In America, companies use millions of Dollars to make experts talk and distinguish because individuals are way more effective advocates than companies are.”

One part of an experts job is to communicate. Some of them end up with personal brands.

Does personal branding also fit for a committed employee?

Of course. Employees swear to the name of their companies, work for the whole team and show their contribution. The whole team benefits when players stand out as individuals.

Is it selfish to brand one's self?

We were being taught that keeping silent is gold. We should get a deeper understanding of what it is all about. When individuals stand out they also divide opinions. Not everybody likes everybody.

”If no one gets mad nothing changes.”

How to build your personal brand?

2. Decide the best way to communicate

5. Understand that the journey is the destination

8. Pedal to the medal and rock on!

The biggest advantage of personal branding for me has been that I really don’t have to sell anymore. My expertise is shown for everybody and I think it is actually a pretty good service!

How do you stand out on social media? Download a free guide on viral marketing and you’ll get a recipe to the creation of viral content.

Everyone knows how nice it is to do business with a GOOD sales person....
Tuomas Haapsaari
Sales and marketing