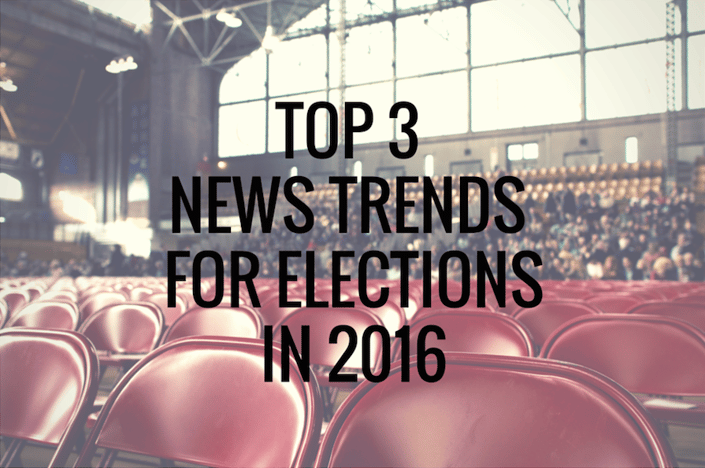 The new year is well underway and it comes with many interesting elections globally - not to mention the climax at the end of the year, the US Presidential election.

How do the top news and social media trends translate to election coverage and take storycrafting to new places? Read my choice of top three trends and see if you agree!

In a Reuters Institute survey, 76% of 130 leading editors, CEOs and digital pathmakers said that it is extremely important to improve the use of data in newsrooms. In his predictions for 2016 , Nic Newman from the Institute remarks on the matter: “In a few years’ time, it will seem extraordinary how uninformed we once were.”

My question is: why are we so uninformed?

Data journalism is not made to seem easy. When I spoke at News:rewired in London in December 2015, and asked for the crowd of journalists and editors how many felt the pressure to be data journalists but do not hold amicable relations with spreadsheets and programming, more individuals had their hands up than down.

Data journalism has always been a big part of election coverage. Who can imagine election night without the waves and waves of predictions and voting data rolling into the newsroom, and watching the story unfold with more and more accurate data? This is nothing new.

What is new in 2016 is that the creative data journalists will stand out in the noise of the election season. They are the ones who can make sense of online big data to uncover public opinion, the fluctuations of candidate stance and the fractions within parties.

They are the ones who can find the story in the data, not the ones who are the most techically skilled in working around spreadsheets, because they take advantage of new tools.

Candidates and parties will rush to social video, Periscope and the like

Social media is becoming more social than ever. In 2016, it’s not going to be enough for a candidate to post articles on Facebook, shoot witty Tweets and call this a social media strategy.

Candidates, like marketers, are expected to give more earlier: to engage with voters as their whole self, with their full personality. Brafton identifies the rise of short, compelling video as one of the key social media trends for 2016.

The rise of video in social and tools like Periscope (online streaming anything, anytime, anywhere) provide the tools for campaigns to do just this, if they are forward enough to grab what’s within their reach. How does this trend translate to election coverage by the media?

Creative, yet unbiased use of this sort of candidate-created material is a challenge to embrace. It is a huge opportunity: following candidates on Periscope has the potential of making life easier for journalists and reduce the need to be physically present at events. Comparative takes to issues, using videos by opposing candidates, can truly enrich news stories.

Finally, I’m not suggesting that we only be spectators at Periscope. But the chances are you are already planning your own content strategy over there *giant wink*.

Past: clicks and views. Future: engagement

During the last quarter of 2015, this was all the talk at media conferences. For example, the NX2016 crowd in Berlin heard numerous tips on how to move beyond the clickbait era and focus on the quality of engagement.

One of the key challenges is how to make advertisers understand these new metrics - that focus on the time spent on the website, the trust-building that happens when quality news stories are the beef, and putting the reader at the center of stories matter even when we speak hard cash.

The next big wave will be interactivity that puts the reader with his or her political opinions at the center, asking: what do you think?

According to the Reuters Institute report mentioned above, 54% of the publishers who took the survey said that increased levels of engagement are a top priority for 2016.

The one-million-dollar-question is: what is engagement in election coverage and how do you measure it?

I predict that interactive content will be a substantial chunk of the solution. Infographics and elections have been married for decades, interactive maps and elections for years. The next big wave will be interactivity that puts the reader with his or her political opinions at the center, asking: what do you think?

The trend was already seen in Spain, when all four most important newspapers (by circulation) used a vote matcher tool of some kind for the December 20th 2015 general election, with a great response from audiences. Could the next step be combining this data with maps, debates and video?

I don’t know about you, but I really look forward to elections around the globe in 2016 - it’s sure to be interesting. If you are a journalist, they provide a golden opportunity to embrace the storycrafting trends of tomorrow.

Minna Rantama is Director for Electoral Services at ZEF. Follow us on Twitter with @MRantama and @VotingAid

Towards the Finnish Elections 2015 with Love!

If you have read our blog before you may have ran into a list “love, ...
ZEF
Leadership, Surveys

The City of Oulu has used ZEFsurvey actively for years. We interviewed...
ZEF
Elections

Are you voting in the Spanish general election on December 20th? Or ar...
Minna Rantama