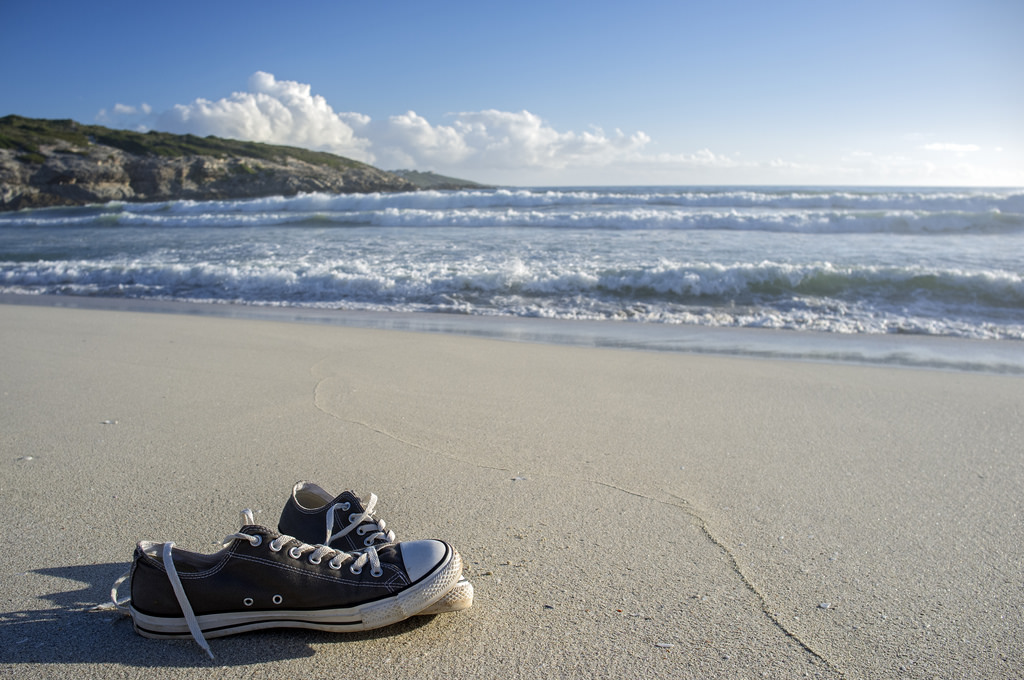 Have you heard the story of two shoemakers who traveled to Africa?

Well, once upon a time there were two fellows called Jack and Jeff. In fact, they were not really fellows to each other but rather competitors. Namely, they were both doing business in the same industry - selling shoes.

Anyway, Jack and Jeff traveled to Africa to study the shoe market opportunities. When they had been traveling for some time they faxed their findings back home.

Jack wrote: “Nobody uses shoes here. The situation is impossible. There is absolutely no demand for shoes. I’m coming home.”

Jeff’s message was a little bit different: “Nobody uses shoes here yet. Send me ten cargos immediately. I’ve found the most potential shoe market in the world. I’ll stay here and make the sales of my life!”

YLE (the Finnish Broadcasting Company) reported recently that Finnish people have a lot of ideas that could be turned into new successful innovations. The only problem is that we are too afraid of taking risks. It seems that, even if we get excited about new ideas and are able to recognize new possibilities, we often choose to do nothing. There seems to be a little Jack troubling within us.

In the country where five minutes' delay in public transportation makes people mad this is not a surprising statement. But I bet this is not a problem touching solely the Finnish population. Humans everywhere tend to love creating strict and solid systems to ensure that everything goes as planned. We become so used to see everything flowing smoothly that we're afraid of things that cannot be predicted. We then integrate the same attitude towards making choices in life in general – whether it’s a question about choosing a career, starting your own business, studying economics or poetry - the safest, most predictable option is the one to grab!

Decisions and choices are essentially about changing things. When you choose one thing over another, you're actually shaping your future. Change may be frightening.

Being afraid of the unknown is not a new concept. But is it possible to change our attitude towards taking risks, towards seeing opportunities instead of obstacles and handling the fear we feel about tough choices? Could we become more like Jeff instead of Jack?

We listed four different approaches to alleviate the pain of difficult decisions and encourage risk-taking.

Brené Brown has researched what is common for the most successful and happy people - and in one of the most viewed Ted talks “The Power of Vulnerability” she shares the secret.

The point is that the most successful people are not necessarily the ones who are most confident about their decisions. Instead, they are the ones who can act in spite of fear. The best leaders accept that they’re afraid of making a wrong choice but they don’t let that fear prevent them from taking a leap of faith.

The underlying factor connecting the people Brené calls “wholehearted” is that they fully embrace vulnerability. They have the guts to be imperfect and willingness to do something where there are no guarantees.

Feeling secure and acting with your full potential when making tough choices is not about trying to be secure. It’s rather about being insecure securely. Quite a paradox, isn't it?

So then, the most awesome way to make difficult decisions is not about avoiding insecurity. It is rather about embracing it. The moment you surrender and choose to accept your insecurity is the exact moment when the life starts meeting you halfway. I'm pretty sure Jeff didn't feel too secure when asking to send those ten cargos of shoes to Africa. But even if he wrote the fax with shaky hands, he did it.

2. See Decisions as a Journey to Self

Philosopher Ruth Chang suggests in her thought-provoking Ted talk that the ultimate way to approach tough choices is to see them as a possibility to make a journey to self.

Difficult decisions are not some horrible moments of truth where there are certain rights and wrongs but actually great chances for self-actualization. They provide an opportunity to write your own identity and shape your own life. Decisions are more about creating a right answer.

One option is rarely much more glorious than the other and all visions about the future are only better or worse guesses on what’s going to happen. So, instead of seeing a decision making situation as a tough pop quiz from the universe, try to see it as a chance to define who you are and who you want to become.

3. Create an Environment of Trust

To encourage risk-taking in your work community, aim at creating an environment of trust. Create an atmosphere where no idea is bad idea and even the worst failure can be celebrated. In the end, there are no mistakes, only different results. It's the definition we give within our minds that makes one result more favorable than the other.

Give feedback in a positive spirit – apply, for example, a good thing – bad thing – good thing feedback pattern in which the idea is to hide the negatives between the positives. For example: "You’re such an awesome writer, dude! --- But there were just few things in your recent blog post which I didn't really get, like this and that and almost everything you said was pretty much messed-up... --- But still, if you keep on practicing, you’ll become the next Hemingway!"

4. Focus on the Gain

Well, this is the most obvious lesson we can learn from the Jeff' 'n' Jack story. When making a a decision, try to concentrate on the potential instead of the possibility of failure. Focus on the gain, not the pain.

When making the next tough decision, consider this. None of us knows what the future is going to look like. The only sure thing we have is the chance to choose focusing either on that cheesy but yet so shiny silver-lining or the boring, grayish cloud. You can either see the potential or an obstacle. Your chance to thrive depends on the way you look at things. And the results you get are directly connected to the future choose to believe in: “Whether you think you can or think you can’t, you’re right.” (Henry Ford)

For all eccentric existentialists out there - if the foregoing fairytale doesn’t convince you - give Mr. Watts a chance. This may seem like a little bit long blah blah but is certainly worth going through, so if your mind is already filled with words, you can also check out his ideas on this video.

Why don’t you really know what you want? Two reasons. Number one - you have it. Number two - you don’t know yourself, because you never can. Just as a knife doesn’t cut itself, fire doesn’t burn itself, light doesn’t illumine itself. It’s always an endless mystery to itself. And this ‘I don’t know’, is the same thing as ‘I love. I let go. I don’t try to force or control’. It’s the same thing as humility. So then, the principle is that anytime you as it were, voluntarily let up control, in other words cease to cling to yourself. You have an access of power. Cause you’re wasting energy all the time in self-defense. Trying to manage things, trying to enforce things to conform to your will. Why don’t you stop doing that? That wasted energy is available. The principle is the more you give it away, the more it comes back. But it’s not power that came to you because you grabbed it, it came in entirely the opposite way. Power that comes to you in the opposite way, is power with which you can be trust.

So, how to become a master of decision-making?

Let’s embrace insecurities. Let's be the authors of our own lives. Let's build trust among each other.

After the unforeseen dissolution of Althing, the Icelandic Parliament,...
Gillion Vaughn

What If Happiness Was the #1 Measure of Work Success?

Why Zeffi?   I'll tell you why. In a good Business strategy we need to...
Mari Paasovaara