Keeping the respondents engaged is critical to getting useful feedback from survey respondents. As you might expect, there is no single silver bullet that would work for all surveys.

This article discusses the 10 factors that make a good question list:

1. Survey starts with a catchy question

Think of your survey as you have to get the respondent involved in the game and keep them engaged. What's the first thing you ask and capture the respondent's interest? Can you ask the question in a graphical question type that has been proven to be respondent friendly? We recommend starting with a 2-dimensional or scale question. 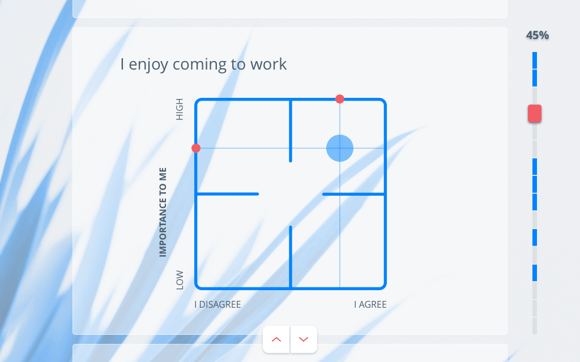 Evaluators assess the questions you ask about in relation to each other, knowingly or unknowingly. Ask the questions related to same theme in a row if possible. You can group the questions into question groups, for example "Communication", "Equal treatment of employees", "Setting objectives" and "Effectiveness of operations".

Once the respondent starts answering, they will not stop in the middle as long as the questions follow each other logically. One key aspect of continuity and logic is that question types or scales used in the questions are not unnecessarily changed during the survey. Any break in the respondent's natural progression increases the risk of interrupting the respondent's answer process. If you have time before sending the survey, take a moment to consider these aspects.

Avoid expressions that your respondents may interpret in different ways. Avoid jargon unless you are sure that respondents understand the terms you use. If you are unsure whether the question will be understood as intended, leave it out or continue refining until you find a clear way to ask the question.

5. Only one thing is asked per question

Avoid situations where the respondent has to answer several issues in the same question or by choosing a certain option. For example, the statement "Our team deals appropriately with quality deviations and schedule deviations." contains two separate evaluation points. It is not always as clear-cut, but generally it is good to avoid comparisons, such as "and" structures in such statements in surveys.

6. Qualitative questions are asked as statements

We strongly recommend using 2-dimensional questions for the delightful response experience they offer respondents. The best solution in this question type is to set the question as a statement. For example, the statement "My supervisor takes my feedback into account." is logical and can be used, as a statement that is assessed with the scale "disagree" vs. "agree". It would also work well as a four-field statement, where we would add, for example, an importance scale: "high" vs. "low".

We now move on from question formulation to the survey scales. We recommend using continuous assessment scales instead of a pure Likert scale or 0-10 scale unless your survey method requires you to use such a scale. This also applies to 2-dimensional questions. Normally one should not choose a less accurate response option than is possible.

8. Logical conditions are in use

We recommend using logical conditions in surveys, which means only asking respondents about things that concern them. There can be a general part that is asked of everyone and then sections that are shown to only those who meet certain criteria. Respondents are given separate survey paths from which they return to the main survey if there are still common questions left in the survey body. 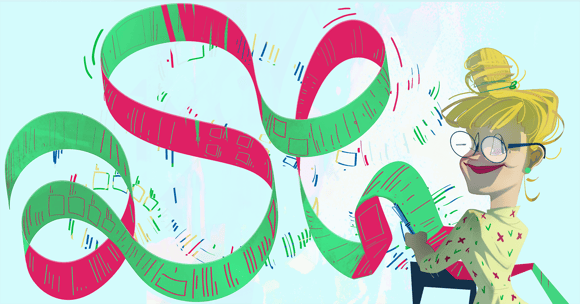 9. The survey is of appropriate length

Even the most attractive survey will become too long at some point. The respondent may drop out if answering takes too much time. For example, in Zeffi's large-scale implementations with over a million respondents, we have found that there is no significant drop-out before 20 question limit but it increases after that is exceeded. On the other hand, a well-made employee survey can be up to 50 questions long. Ultimately, it is a question of the respondent's motivation: does the respondent feel that they are getting value for the time they are spending?

10. The question set is comprehensive

When you have planned the questions as a whole, think about how the different aspects you are assessing are represented. Do they get the weight they deserve? Is there repetition in the questions? Make sure you cover all the necessary topics either in questionnaire itself or in imported background information.

Are you ready to lead to create your next survey. Try Zeffi survey tool to get high response rates!

Did you like this blog post? Sign up for our weekly blog newsletter by filling the form below! We send the letter each week when there is new content and you can unsubscribe any time.

The ABC of an outstanding Survey It is important to consider how you w...
Janne Vainikainen
Inspiration, Success, Surveys

Asking the right questions - how to design a survey that works for you...
Zeffi
Customer Experience, Surveys

As customer-centricity has become an important part of nearly every su...
Zeffi