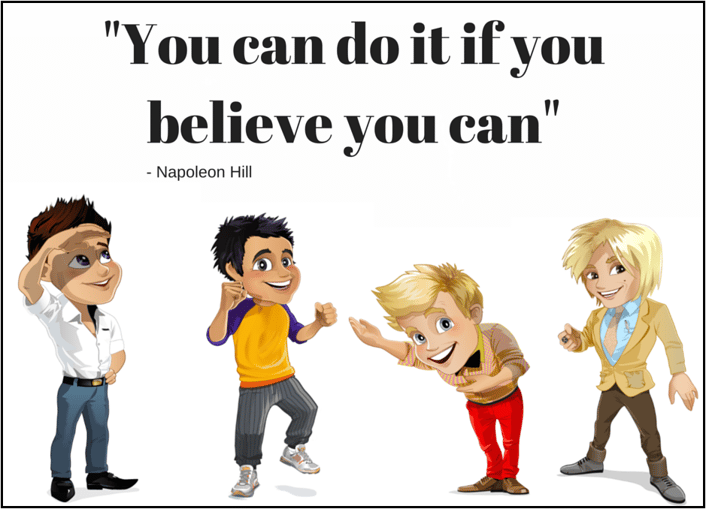 There lives a champion within each of us. It is you who never gives up and is ready to do what ever it takes to achieve goals you desire? The champion within you is not always at its strongest and you might even sometimes doubt if it even exists. It is there I can tell you that. You just need to find it and activate it.

How do you awaken the champion within?

I gathered three inspirational stories of how some people have risen from rags to riches after following their dreams. What can we learn from these examples?

1. Usain Bolt - the fastest man in the world

In 1996 when Usain Bolt watched the Atlanta Olympics 100 meter finals, he decided to be the fastest man in the world some day. After his decision he has spent all his time and energy training and competing.

In his twenties he was diagnosed with severe scoliosis. The doctor said that he could probably never compete again. He didn’t give up and found a way to keep his back in good condition.

In 2015 Bolt raced against Justin Gatlin in Peking Olympic Games 100m finals. The starting point was this: Gatlin was in his best ever physical condition. He had won all the competitions during the season. Bolt was not in a very good condition. He had had lots of back problems. The expectation was that Gatlin will conquer Bolt.

In the semifinals Gatlin was clearly the fastest. Bolt was close to ruining his semifinal run by almost falling in the start. He was still able to make it to the finals. Finals started well for both Gatlin and Bolt. Gatling was leading the race until 90 meters when his running broke down and Bolt got ahead of him. Bolt kept his position till the end and won the race by one hundredth of a second! His winning time was worse than Gatlin’s semifinal time but still just good enough for the victory.

What can we learn from Usain Bolt about winning?

If you want to win you need to develop a stronger will to win than any of your competitors have. If you have a strong enough will to achieve something, you’ll usually find a way to reach it.

Top sprinters are competing mentally already before the race. Who is mentally the strongest, usually wins. Bolt has a great ability to control his mind and it's really hard for anybody to beat him mentally.

Bolt has always been a hardcore practicer. He believes that the ability to train really hard is one of the core keys to success in sports.

What can we learn from Muhammad Ali about winning?

Work hard for your future. Don’t wait for quick wins and never give up. Suffer now and celebrate later as a champion.

Winners are not made in the gym. It happens inside of one's head. If you really want to win, you need have a burning desire to win, big dreams and a bright vision of where you want to be heading.

Set yourself high goals and stick with them. Goals are the greatest source of energy.

Visualize the victory. Many times human mind is full of fears and doubts. A competitive advantage of Ali was his ability to prepare for a victory, not the loss.

3. Oprah Winfrey - From Rags to Riches

Oprah Winfreys talk show The Oprah Winfrey Show is one of the longest-running daytime television tabloid talk shows in history. Winfrey’s fortune is billions. She wasn’t born to a rich family, though.

Oprah was actually born to a very poor family. She was sexually abused in her childhood, and she gave a birth to a baby at the age of 14. The baby died after two weeks. So we could say that she didn’t have the optimum starting point for a good life. How on earth have Oprah still been able to build such a great fortune and a succesful career?

1. You become what you believe

Oprah believed in her abilities and changes to reach her goals from the beginning of her life. She encourages everybody else to believe in themselves as well. There is an infinitive potential within us even though we do not feel it all the time. We still have to believe in ourselves!

2. The ability to manage difficult situations

Oprah tells that she had created a sense to manage difficult situations already in her childhood when facing lots of challenges. It has helped her later on to move forward in her career.

3. The ability to identify and take advantage of opportunities

Always think how you could help other people. The more you help others the more they will help you. And the more helpful you are the more you’ll get good opportunities. So, turn your mindset from yourself to serving others.

According to Oprah, following her dreams has been one of the most important driver of her successful career. She felt the calling to journalism from her childhood. Later in her career she has rejected all the other job proposals and stuck with chasing her dreams in journalism. It has required a lot of bravery but it’s been rewarding.

I really hope that these examples could help you think about your calling and encourage you to follow your dreams. By that you’ll awaken the champion within you. Good luck!

After finding a champion within you, you can spread the positive and enthusiastic attitude to the whole staff of your company! Download a very popular guide on how to lead and measure the enthusiasm of your staff.

The City of Oulu has used ZEFsurvey actively for years. We interviewed...
ZEF
Sales and marketing

Everyone knows how nice it is to do business with a GOOD sales person....
Tuomas Haapsaari
Sales and marketing

This is what Mikko Seppä said in his speech at the Modern marketing ev...
Tuomas Haapsaari